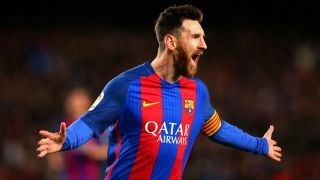 Lionel Messi was at his sublime best as he scored two and inspired three more goals in Barcelona's 5-0 hammering of Celta Vigo, their first match since head coach Luis Enrique announced his plans to leave at the end of the season.

Luis Enrique confirmed his imminent departure after Wednesday's 6-1 dismantling of Sporting Gijon and that certainly did not appear to distract his men in any way as talisman Messi led from the front in a sensational display to see Barca retain their place at LaLiga's summit, a point ahead of Real Madrid who have a game in hand.

Barca played the first half with real freedom and carved Celta open several times before eventually breaking the deadlock through Messi, who applied a typically clinical finish after a fine run.

The Argentina international ran the show and caused havoc in his free role, setting Neymar up for Barca's delightful second five minutes before the interval.

Messi then unlocked the Celta defence in the lead up to Ivan Rakitic's controversial third, before then laying the ball on a plate for Samuel Umtiti's first Barca goal.

The inspirational forward then doubled his personal tally with what was Barca's third goal in seven minutes, securing another emphatic victory ahead their attempt at a Champions League last-16 rescue job when they host Paris Saint-Germain at Camp Nou with the Ligue 1 champions leading 4-0 from the first leg.

Luis Enrique's announcement had no negative impact on Barca during the first half as they moved the ball around well and generally dictated the tempo.

They were made to wait until the 14th minute for their first shot on goal and the move that preceded it showed their potential in attack as Messi linked brilliantly with Neymar on the edge of the box before seeing his eventual effort saved by Sergio Alvarez.

Luis Suarez poked the ball through Gustavo Cabral's legs and caressed a 25-yard effort on to the right-hand post, with Messi then doing exactly the same from the rebound.

But Messi was not denied a few moments later, coolly slotting a left-footed strike into the bottom-left corner from just outside the box after a trademark jinking solo run.

Messi then turned provider just before the break feeding Neymar into the box and the Brazilian beat Alvarez with an outrageous first-time chip.

Barca's dominance showed no sign of letting up after the break and they should have extended their lead, only for Sergi Roberto's touch to desert him at the crucial moment and give Alvarez the chance to make an intervention after the right-back's driving run.

Rakitic eased any fears soon after, though, stabbing home from an offside position after Rafinha latched on to Messi's defence-splitting pass and cushioned it into the Croatian's path.

But there was no such controversy about Umtiti's effort as the Frenchman got himself into a great position in the danger zone and was on hand to turn in Messi's pass.

Messi then did it all himself for his second of the day just after the hour mark, striding past a couple of defenders before slotting into the bottom-right corner with a disguised finish.

Barca nearly scored six for the second time in four days when Messi found Suarez in the danger zone two minutes from time only for Alvarez to recover and save his stooped header, but it was still job done ahead of PSG.