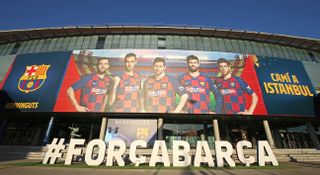 Barcelona have revealed that one of the nine players who have returned to pre-season training has tested positive for coronavirus.

The unnamed player “has no symptoms, is in good health and has been quarantined at his home”, the LaLiga club said.

“The player has not been in contact with any of the senior team players who are scheduled to travel to Lisbon this Thursday to compete in the Champions League,” read the statement published on fcbarcelona.com.

Barca are due to face Bayern Munich in a Champions League quarter-final in the Portuguese capital on Friday night, with a semi-final against either Manchester City or Lyon awaiting the winner.

Pedri, Trincao, Matheus Fernandes, Jean-Clair Todibo, Moussa Wague, Carles Alena, Rafinha, Juan Miranda and Oriol Busquets are the nine players identified on the club website as having returned to training while their first-team counterparts prepare to travel to Portugal.

Barca said: “The club has reported the matter to the relevant sporting and health authorities. All persons who have been in contact with the player have been tracked to perform the corresponding PCR tests.”

Valencia, Atletico Madrid and Sevilla are among the other LaLiga sides to have reported positive Covid-19 tests among their players in recent weeks, although no fixtures have yet been suspended due to the cases.