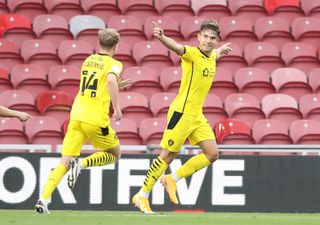 Patrick Schmidt and Jordan Williams were on target as Barnsley set up a Carabao Cup trip to Chelsea following a 2-0 victory over Middlesbrough in an all-Championship second-round tie at the Riverside Stadium.

First-half goals from Schmidt and Williams settled things on Teesside, with the Tykes comprehensively outplaying their opponents, who finished four places above them in the Sky Bet Championship last season.

Neil Warnock made seven changes to his Middlesbrough side with his patched-up line-up underlining the need for further reinforcements before the transfer window closes next month.

Barnsley lost at home to Luton on the opening weekend of the league campaign, but Gerhard Struber’s side started strongly against Boro and claimed the lead midway through the first half.

They almost scored after just nine minutes, but Dominik Frieser swept a first-time effort straight at Middlesbrough goalkeeper Marcus Bettinelli after wing-back Kilian Ludweig crossed the ball in from the right.

Ludewig was involved again when Barnsley broke the deadlock 13 minutes later, spinning away from Nathan Wood to create space before passing to Luke Thomas.

He rolled in Schmidt on the right of the box and the Austrian appeared to catch Bettinelli off guard with a side-footed effort that beat the Boro goalkeeper at his near post.

The home side had scored four goals against Shrewsbury in the previous round, but they were much less threatening 11 days later.

Marcus Browne glanced an early header wide of the target and Lewis Wing drilled a long-range free-kick wide, but things got worse from a Middlesbrough perspective when Barnsley doubled their lead 11 minutes before the break.

Another slick passing move culminated in Thomas threading an excellent ball through to Williams, who had ghosted behind an out-of-position Hayden Coulson.

The wing-back steadied himself in the area before slotting home a finish that saw Bettinelli beaten at his near post for the second time in the game.

Barnsley spent most of the second half content to sit on the lead and attempt to hit Middlesbrough on the break, and the tactic almost paid off shortly after the hour mark as Schmidt broke clear of the Teessiders’ defence before firing in a shot that Bettinelli beat away.

Boro’s efforts to get back into the game proved ineffective – although Coulson and Marcus Tavernier both fired in efforts from just outside the box that Bradley Collins got down to save.

Wing also whistled a second-half strike narrowly wide of the post but Barnsley were never really threatened as they held on comfortably to set up a trip to Premier League giants Chelsea at Stamford Bridge.