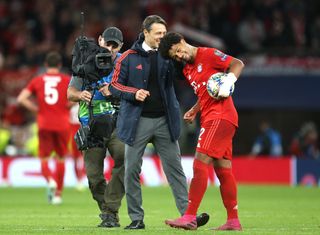 Niko Kovac has warned his Bayern Munich players not to get carried away after their extraordinary rout of Tottenham on Tuesday.

Ex-Arsenal forward Serge Gnabry scored four goals as Bayern thrashed Spurs 7-2 in north London in the Champions League, but Kovac is now wary of over-confidence going into his side’s Bundesliga clash with Hoffenheim on Saturday.

“We need to keep our concentration,” Kovac said. “We played against the Champions League finalists and we had problems for 25 or 30 minutes.

“We can’t dominate for 90 minutes. It was a great game from us but we need to put in the same performance against Hoffenheim as we did against Tottenham.

“We want to remain objective, humble and continue to work.”

Bayern sit top of the Bundesliga with 14 points from their opening six games, while Tuesday’s win also has them top of Group B in the Champions League.

Given the questions that hovered over Bayern at the start of the season given their summer departures and failure to land key targets, Kovac can be happy with the start they have made.

“We have got a good group of players that are growing close together,” he said.

“The players are absorbing more and more what we want to see from them. I’ve been noticing this for a while now.

“But we haven’t achieved anything yet.”

Both Jerome Boateng and David Alaba were substituted in London with minor injuries. Boateng has quickly shaken off a muscular problem, but Alaba remains doubtful with a bruised rib.

“He still has some difficulty breathing,” Kovac said. “He has signalled he is ready, but we have to make a decision on how much sense it makes from a medical point of view.”

Lucas Hernandez remains out with a knee problem, sidelined along with Jann-Fiete Arp and Leon Goretzka.
Hoffenheim have had an indifferent start to the season, and come into the match without a win in their last four.

A home victory therefore looks like a foregone conclusion, but Hoffenheim coach Alfred Schreuder is plotting to frustrate his hosts.

“Bayern want to have the ball and play football, and we have to prevent that,” he said.

“We have to be strong in every area, defensively and offensively. They will attack us, but we have to find the space and play with courage going forward.

“Just staying behind the ball makes no sense. We have a good plan and we’ll see if we can take some points.”

🗣️ "Every team has their strengths and weaknesses. If you analyse Bayern, you can see a pattern. Our plan is based on that."— TSG Hoffenheim EN (@achtzehn99_en) October 4, 2019

Tuesday’s Champions League match will have made daunting viewing for Schreuder, but it did not change his thinking.

“Bayern are in top form, but every team has its strengths and weaknesses,” he said.

“I’ve seen a lot of Bayern games. They are a great team, of course. But if you see a lot of them, you can analyse them and understand how they want to play.

“We have to work to create our own chances.”