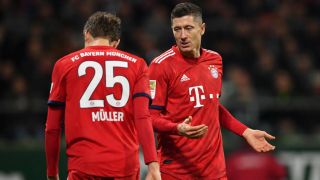 Bayern Munich's greatest mistake in the off-season was not appointing Niko Kovac but failing to overhaul the playing squad, according to club icon Lothar Matthaus.

The six-time defending Bundesliga champions have made a stuttering start to 2018-19, winning only seven of their opening 13 matches to sit fourth, nine points behind leaders Borussia Dortmund.

Head coach Kovac, who arrived from Eintracht Frankfurt, has been saddled with a good deal of the responsibility for those toils, but Matthaus believes the problems lie elsewhere.

Matthaus, who won seven league titles across two spells with Bayern, believes the modern game is catching up with the likes of Arjen Robben, Franck Ribery, Jerome Boateng and Thomas Muller who for years have operated as key figures among the squad.

"Niko Kovac was a player with Bayern 15 years ago. He has the DNA of Bayern, he knows the Bundesliga," Matthaus told Goal.

"He has Croatian roots but he was born in Germany. He was playing in the Bundesliga, he had a good result last year with Eintracht Frankfurt. He was a Croatian national coach, he has the experience to work with stars. But Bayern Munich is something special.

"And for this, he needs a little bit of support from the people who are working in the club. For me, the mistake Bayern did was that they did not change the players.

"They have the players who have been playing for the last six years like Robben, Ribery, Boateng, Muller. Times change, football is going faster and faster and the young generation is coming more. The biggest mistake Bayern did before the season was that they didn't make the change.

"When the summer comes it will be the end of a long and beautiful period in my life." December 4, 2018

"Kovac has to manage players who have won everything in the previous years. I miss some motivation from players. When you have won the title six times, how can you motivate yourselves? It is not on purpose, it is automatic psychologically.

"This was the problem for him. Maybe [he got] some decisions wrong. He has to learn and I think he will learn. He is a good coach. He is working from morning till evening very hard to make players better.

"If Bayern gives him the support, the president, the director, the fans, I am sure Bayern will have the same results with Kovac what they were having in the previous years with other coaches.

"And now, step by step, they will fight back. Bayern have very good young players and with Niko Kovac as the coach, he has to give the chance for the young players to play."