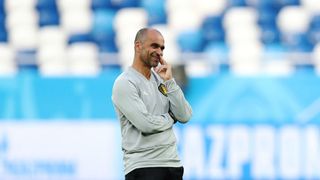 Belgium head coach Roberto Martinez does not believe beating England in Thursday's concluding Group G match is a priority for his team.

The Red Devils and the Three Lions have arrived in Kaliningrad with six points out of six and passage to the last 16 already secured.

Results elsewhere and the way the knockout draw has fallen so far have led to widespread suggestions the runner up out of England and Belgium would be in a better position to blaze a trail into the latter stages.

It could make for a surreal contest on Thursday, with both bosses expected to ring the changes and protect players from potential suspensions.

England manager Gareth Southgate once again reiterated his desire to win the game and continue a fine run of form but at his own pre-match news conference, Martinez stated three points were only part of the equation.

"At the moment we are qualified and I think that was the priority that we were chasing for," he said.

"Now we need to look into our individual players. Tomorrow we want to perform well but the priority is not to win.

"There are players on yellow cards. I don't think it would be professional for us to risk those players missing a knockout game.

"It's very important for us to protect and give every player the best possible programme to be in the best condition for the knockout games.

"I believe in every player in this squad so it would be quite stupid for me not to believe in these players tomorrow.

"If we can win great, but I think the priority is another one than just winning tomorrow."

The last time England and Belgium met at a World Cup, David Platt volleyed a famous extra-time winner to send Bobby Robson's side into the quarter-finals if Italia 90.

Although that contest still lingers in the memories of supporters from both countries, Martinez feels the state of play in the group and the fact that 12 of his own squad are British based will lend a very different feel to proceedings

"It brought a lot of pain to Belgium people and fans. This is a different game – a celebration game. At that point it was one or the other," the ex-Wigan Athletic and Everton manager added.

"It would have been very different if Harry Kane had not scored in the last minute against Tunisia [England's opening 2-1 win] – then Platt's goal might have been a bit more of a memory for everyone."