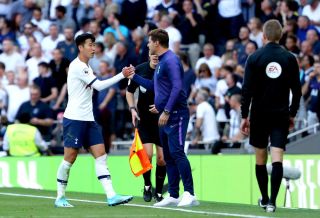 Tottenham manager Mauricio Pochettino challenged his players to perform and be focused on a consistent basis after the 4-0 win over Crystal Palace and revealed David Beckham wishes he could play for this team.

The former England captain watched on from the stands as Spurs tore the visitors apart with Son Heung-min netting a first-half brace in the Premier League fixture.

Patrick van Aanholt also put through his own net while Erik Lamela wrapped up a 32-minute scoring spree before the break at Tottenham Hotspur Stadium.

🗣️ Sonny: "This is a reminder of how strong we are and how we should play." #THFC ⚪️ #COYSpic.twitter.com/SgT0iu5TV9— Tottenham Hotspur (@SpursOfficial) September 14, 2019

With the European transfer window now shut and no more distractions for his players, Pochettino wants to see more displays of this manner, especially in their new stadium.

He said: “We haven’t played too many games here. Our first game was against Palace then we played a few games more, some in the Champions League, now three in the Premier League this season. Still, it’s all new.

“I think it’s an amazing stadium. I was talking to David Beckham just now and he said ‘I wish I could still play football and play now for Tottenham because this stadium is amazing’.

“For us it’s so important to make our stadium our home and start to feel comfortable. It’s completely different to White Hart Lane and of course I think with time we are going to feel at home and it’s going to be difficult for opponents to beat us.”

Tottenham were at their scintillating best from the off, attempting two shots inside a minute before Son opened the scoring in the 10th minute.

Toby Alderweireld picked him out with a wonderful through ball and the South Korean cut inside and drilled into the corner.

Spurs doubled their advantage 11 minutes later when Serge Aurier – making his first start of the season – saw his cross deflected in by Van Aanholt.

The floodgates were open now and Son increased his tally with 23 minutes played, volleying home Aurier’s cross before Lamela got on the end of Harry Kane’s centre in the 42nd minute.

Pochettino admitted it shows what can be achieved when his players have no distractions. He said: “When the team is unsettled, when the squad is unsettled, it is so difficult to perform in the way you want to perform.

“I’m not complaining or blaming anyone, but it’s only that in football it’s so easy to describe the situation and the focus wasn’t on playing football and it wasn’t on trying to improve.

“The focus wasn’t on the places we wanted it and it’s not easy to perform that way. Of course, we have quality, enough to win games without focus, but when you are focused it showed in that first-half performance of the team.

“The intensity, the concentration. We know what we need to do and when you are able to do that the quality we have appears. We have tremendous quality in our squad, unbelievable players.

“If we show that intensity in all our games for sure we are going to fight for big things. I am so happy to recover that feeling.”

Palace manager Roy Hodgson admitted the opening 45 from his side was not good enough and felt the only real positive was Mamadou Sakho playing the whole match for the first time since February.

“We are obviously unhappy with our first-half performance. All of us are prepared to accept the responsibility for that. We didn’t show the intensity I hoped we would, but I don’t want to take too much away from Tottenham during that spell because they played very well,” he said.

“I am glad it didn’t become more than four. That is bad enough, so I didn’t want any more.

“The only real positive I can take from the game is Mamadou Sakho, after such a long lay-off and such a long time out through injury, got through 90 minutes in a very tough game.”