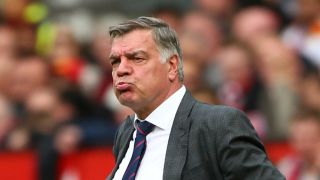 Crystal Palace manager Sam Allardyce has announced he is to quit the club and retire from football.

Allardyce announced his decision in a statement released on Tuesday, describing the move as a "simple decision".

The departure of the 62-year-old from Selhurst Park comes five months to the day after he was appointed as successor to Alan Pardew at Palace.

Former England boss Allardyce said it was the "right time" to step down despite leading Palace to Premier League survival, collecting eye-catching wins against Arsenal, Chelsea and Liverpool.

"In some ways, this has been a very difficult decision to make but in others it has been a simple one," Allardyce said in his statement.

"I will always be grateful to Crystal Palace and [chairman] Steve Parish for giving me the opportunity to go out with my head held high having helped keep the club in the Premier League.

"But there comes a time when you have to take stock of what direction you want your life to take - and that’s been the simple part for me.

"This is the right time for me. I have no ambitions to take another job, I simply want to be able to enjoy all the things you cannot really enjoy with the 24/7 demands of managing any football club, let alone one in the Premier League.

"I would like to thank everybody for their messages of support since the news broke. I’ve no doubt I will miss management but I certainly have no regrets at this decision."

Allardyce initially struggled to make an impact at Selhurst Park, but when Patrick van Aanholt struck the only goal in a 1-0 success at home to Middlesbrough on February 25 it sparked a stunning run of form that secured the team's place in the Premier League.

Palace won four matches in a row, culminating in a stunning 2-1 triumph at Stamford Bridge.

Allardyce's men followed up that unlikely victory with a 3-0 demolition of Arsenal at Selhurst Park and a 2-1 win at Anfield, a result that effectively sealed safety, although Palace then lost three consecutive league games without scoring a goal.

However, a 4-0 thrashing of Hull City in the penultimate match of the season guaranteed Palace their place in the top flight for the 2017-18 campaign.