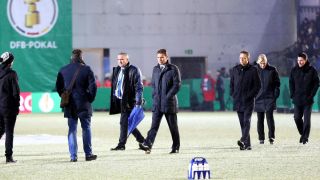 Borussia Dortmund's DFB-Pokal quarter-final match at third-tier side Sportfreunde Lotte was postponed on Tuesday due to heavy snowfall.

The match had been in danger for most of the day and Dortmund's bus was even caught up in the adverse conditions upon the team's arrival in Lotte, getting stuck in mud in a field near the stadium.

A tractor eventually hauled the bus out of its sticky situation in Lotte, approximately 120km north of Dortmund, but conditions did not let up and the pitch was been deemed unplayable.

The decision was made less than 30 minutes before kick-off at the 10,000-seater stadium, with both coaches picking their respective starting line-ups in the assumption the match was due to go ahead.

Lotte qualified as a regional Westphalia representative and are regarded as one of the smallest clubs to ever get to the final eight and have already beaten Bundesliga opposition in Werder Bremen and Bayer Leverkusen.

However, their packed stadium will have to wait for their fairytale clash until a later date which is yet to be confirmed.