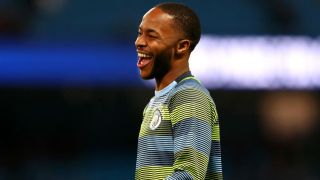 Manchester City have confirmed Raheem Sterling has signed a three-year contract extension, committing him to the Premier League champions until the end of the 2022-23 season.

He has started the new campaign impressively as well, playing a role in 11 goals in just nine league outings as City sit top of the table ahead of Sunday's Manchester derby.

Sterling's previous deal was set to expire in 2020 and talks over a renewal were reported to have been started many months ago.

The 23-year-old attacker has come on leaps and bounds at City since joining from Liverpool in 2015, a deal which may eventually cost the club nearly £50million.

Pep Guardiola's introduction as coach in 2016 seems to have had a particularly significant impact on his development, after being criticised for a lack of consistency in the final third earlier in his career.

"I'm delighted to sign," said the England international. "My development here has been incredible.

"I felt from the minute I got here it was the right choice for me. It’s paid off and I'm really grateful."

Director of football Txiki Begiristain added: "This is a significant moment for the club. Raheem has improved dramatically in the past two seasons and is now one of the Premier League's best attacking players. His statistics tell their own story.

"He's quick, strong and excellent in front of goal – everything a modern-day forward needs to excel. We're all delighted he has committed his future to City."

Sterling's new contract is reported to make him the highest-paid British player in the world, with it purported to be worth £300,000-a-week.