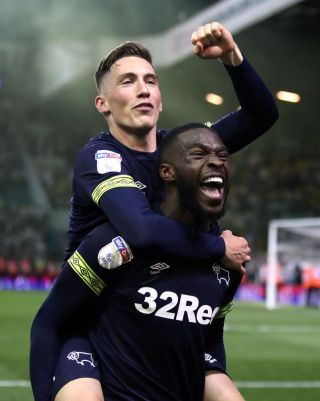 Derby boss Phillip Cocu believes it will be “very difficult” to bring Harry Wilson, Mason Mount or Fikayo Tomori back to Pride Park.

The three young loan players were pivotal last season as the Rams narrowly missed out on promotion after defeat in the Championship play-off final at Wembley, with defender Tomori being named player of the year.

PA understands Derby have contacted Liverpool about Wilson’s availability after the attacker ended the 2018/19 campaign as top scorer with 18 goals.

The 22-year-old Wales international has featured for Liverpool in friendlies against Tranmere and Bradford recently and he has been included in the Reds squad that has travelled to America for a week-long tour.

It remains to be seen whether he will feature in Jurgen Klopp’s plans but Derby are understood to have asked to be considered should Liverpool decide to loan out Wilson again.

“If you look at the value of those players to the team last season, it was very big. But it will be very difficult, I think. I won’t say impossible, but it will be hard,” said Cocu.

“We are still working to strengthen the team and there are a lot of possibilities still. I don’t want to name any names yet, but we are trying to get some players in.”

Former Derby boss Frank Lampard was pivotal in Tomori and Mount, who has recently signed a new long-term contract at Chelsea and looks to be pushing for involvement in the first team under Lampard at Stamford Bridge, arriving at Pride Park.

His strong Chelsea connections paved the way for their loan deals.

Cocu has strong ties with his former club PSV Eindhoven, having played for them twice and won three Eredivisie titles as manager, but he insists he will not be going down that route to recruit players.

“I don’t think I will do that, no,” he said. “The league in Holland is different and the style of play is different. Would it be good for this player to play in this physical league that’s high tempo?

“You have to consider more than if it is a good player, he has to fit the league you play in. There are some players I really like but they would be expensive and sold for big amounts.”

The 48-year-old does plan on using other contacts he has, however.

“Always you use these in football – agents, technical directors or other managers. Whether it is from my time in Holland or at Barcelona.

“But I am not going to tell if I have spoken to someone or not, just yet. We are working hard on players but other clubs have not come to a decision on their players or on their squads yet.”