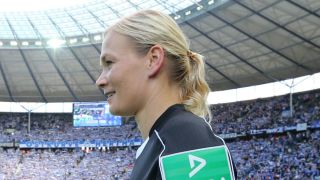 Bibiana Steinhaus made history as she took charge of the 1-1 draw between Hertha Berlin and Werder Bremen on Sunday to become the first female referee in Bundesliga history.

The 38-year-old police officer, who officiated matches in the 2. Bundesliga for 10 years before being appointed to the country's premier competition, issued just one yellow card as the game passed without controversy.

Steinhaus made an excellent decision to play advantage when Hertha's Vladimir Darida was fouled, allowing Mathew Leckie to subsequently score the opening goal of the game.

Danish midfielder Thomas Delaney equalised after 59 minutes to help Werder earn their first point of the season but the story of the day belonged to Steinhaus, who previously took charge of Bayern Munich's 5-0 win over Chemnitzer FC in the DFB Pokal in August.

She told the Bundesliga's official website: "I'm relieved, to be honest, that it's successfully over and now we can look forward to the next one and start a normal life from tomorrow."

Stars from across world football paid tribute to Steinhaus' historic achievement, including Spain and Porto goalkeeper Iker Casillas, who tweeted: "All the luck in the world to Bibiana Steinhaus and the women who come after!"

1 - Bibiana Steinhaus is the first woman to referee a game. History. September 10, 2017