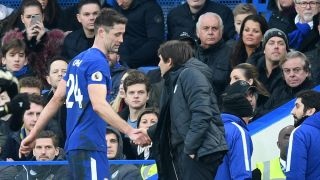 The hamstring injury sustained by Chelsea captain Gary Cahill against Leicester City is not serious, according to head coach Antonio Conte.

The Italian made just two changes from the side that started the EFL Cup semi-final first leg against Arsenal on Wednesday, with Cahill, one of those who returned to the first XI, hobbling off in the 33rd minute.

Andreas Christensen replaced him in defence, but Conte does not expect the skipper to be ruled out long term.

"I think he is with the doctor now, but it's OK, I do not think it was serious," he told the BBC.

FULL-TIME Chelsea 0-0 LeicesterLeicester leave Stamford Bridge with a point despite going down to ten men January 13, 2018

Leicester's relentless pressing made it difficult for the Blues to create opportunities, even after they were reduced to 10 men following the second yellow card shown to Ben Chilwell.

Eden Hazard was unable to make an impact before being replaced ahead of the hour mark, while Alvaro Morata did not have a single shot at goal.

The result represented the first time Chelsea have drawn three straight matches 0-0 in their history, and Conte blamed fatigue rather than singling out the misfiring Morata.

"I think we played with a lot of top players against Arsenal, and then again today against a very good team. I think a lot of our players were tired," the Italian said.

"In the first half Leicester ran more than us, they played better than us, but we knew we were playing against a good opponent, maybe the worst opponent we could have played in this moment. We suffered a lot in the first half.

"I don't think it is only Morata's problem, also the other players, because we are not scoring goals, we are not conceding, but we are not creating chances."