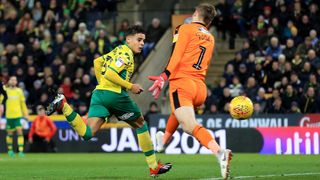 Norwich City reclaimed top spot in the Championship after battling back to beat Rotherham United 3-1 at Carrow Road.

Daniel Farke's side responded well to the setback of Leeds United's earlier win at Sheffield United and an 11th-minute goal from Rotherham's Richard Towell to claim all three points.

Nottingham Forest and Derby County boosted their play-off ambitions, while Birmingham City overtook Stoke City thanks to a late equaliser from Reading.

At the other end of the table, Hull City claimed a hugely important win away from home, but things continue to look bleak for Ipswich Town.

However, Todd Cantwell finished from Teemu Pukki's set-up to restore parity with his first goal for the club, and the scorer turned provider when he sent Max Aarons through to make it 2-1.

Pukki buried a third to ensure Norwich go back to the top, a point above Leeds, while Rotherham slip to 20th in the table.

Sheffield United's day was made worse by Nottingham Forest's 2-0 win over Ipswich, which puts Aitor Karanka's side fifth and leaves the Tractor Boys seven points from safety.

That feeling when you score your first goal for your boyhood club! December 1, 2018

Stoke looked to be heading for three points after Benik Afobe and Tom Ince overturned Marc McNulty's opener for Reading, but Modou Barrow made it 2-2 in the fourth minute of injury time to deny Gary Rowett's side.

Birmingham, meanwhile, climbed into eighth in the table after goals from Maikel Kieftenbeld, Jacques Maghoma and Che Adams secured an impressive 3-0 win over Preston North End, who saw their nine-game unbeaten run in the league come to an end.

Derby held on to a 2-1 win over Swansea City to move level on points with Sheffield United, while Blackburn Rovers stayed in the top-six hunt after Danny Graham's hat-trick inspired a 4-2 win over Sheffield Wednesday.

Mowbray on DG: “We’re delighted he’s working hard and scoring goals. His combination with Dack is good for the team. They are a great partnership.” December 1, 2018

Queens Park Rangers saw their recent resurgence come to an end when they were shocked by Hull in a five-goal thriller at Loftus Road.

Steve McClaren's side had only lost one of their last nine, but two goals from Jarrod Bowen helped the visitors to a 3-2 victory that puts two points between them and the relegation zone.

Bolton Wanderers held Wigan to a 1-1 draw that had looked set to lift them out of the bottom three until Reading's late leveller, although only Christian Doidge's goal-line clearance stopped Lee Evans from giving the visitors the win in the dying moments.