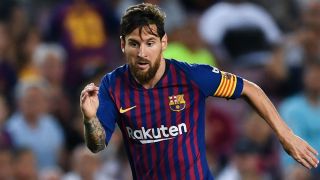 Lionel Messi reaffirmed his desire to finish his career at Barcelona, saying a move from the LaLiga champions would be complicated.

Messi, 31, is contracted at Camp Nou until mid-2021, having re-signed with the club late last year.

The Argentina star – who has already scored four goals this season – said his plan was to remain at Barca.

"The idea would be to stay at Barcelona," Messi told Catalunya Radio on Monday.

"My family is very settled. Changes would be very big and complicated."

Messi said he wanted to get to the end of his contract, by which time he will be 34, before deciding what was next.

However, the superstar attacker said he saw no reason to leave his boyhood club.

"I have everything here," Messi said. "I have been at Barcelona since I was 13 years old.

"It's the best team in the world, in one of the best cities in the world. My children were born in Catalonia and I don't need to go anywhere."