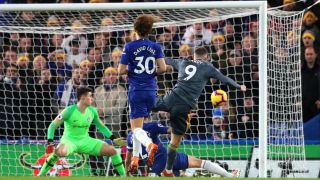 Jamie Vardy scored on his 250th Leicester City appearance as the Foxes ended an 18-year wait for a Premier League win at Chelsea in a 1-0 triumph.

The former England striker had been starved of service until clinically finishing a brilliant Leicester counter early in the second half, which ultimately proved enough to clinch a first win at Stamford Bridge since 2000.

It was a hugely frustrating afternoon for Maurizio Sarri's side, who controlled large periods of the game and saw Eden Hazard - one shy of 100 competitive goals for the Blues - hit the crossbar in the first half as well as Marcos Alonso strike the post in the 91st minute when clean through.

Chelsea, who lost a league match at home for the first time under Sarri, consequently head into Christmas 11 points behind leaders Liverpool, while rumours that Leicester were planning on sacking Claude Puel may subside after this much-needed win.

The Blues' play was sharp if lacking in incisiveness early doors, although David Luiz was desperately close to meeting Pedro's flick on from a Willian corner.

Leicester had an almighty let-off when Hazard pounced on Harry Maguire's poor control and rifled an effort against the crossbar.

Neither team had a shot on target until the 41st minute with Kepa Arrizabalaga's strong hand keeping out Wilfred Ndidi's stinging 30-yard drive.

Willian tamely struck at Kasper Schmeichel after a fine team move, while Jorginho's well-hit half-volley forced the Leicester keeper into action again as Chelsea finished the half strong.

The Blues were caught cold six minutes after the break, though. Leicester launched a counter-attack that led to James Maddison slipping in Vardy to emphatically fire past Kepa when one-on-one.

Schmeichel was sharp to keep out Hazard's left-foot effort from a tight angle, and at the other end Kepa's spill from Marc Albrighton's cross needed swift action from Cesar Azpilicueta to deny Vardy.

Leicester's goal lived a charmed life in the closing stages with Antonio Rudiger heading wide from point-blank range and Alonso fluffing his lines by striking the left post when one-on-one.

What does it mean? Relief for Puel, but Blues' title hopes stung

Puel has faced rumours this week that squad disharmony and a return of one league win in six could lead to his sacking, but a big triumph here is a much-needed early Christmas present. There will be little festive cheer for the hosts, though, who are 11 points off the top.

Leicester fans love to affectionately sing 'Jamie Vardy's having a party' and he had cause for celebration with a typically clinical counter-attacking goal. The Foxes had done little to provide chances for Vardy until his goal, but when it came he did not disappoint. Ricardo Pereira and Ben Chilwell also impressed for the away side.

There is arguably no better defensive midfielder on the planet than N'Golo Kante. But Sarri's insistence on playing the France international in an advanced position to slot Jorginho deeper in his midfield is not bringing the best out of the former Leicester star. On a few occasions, Kante found himself high up the pitch but lacking the attacking quality to break the Foxes' rear-guard.

The festive season kicks into gear with Chelsea making the hop across London aiming to bounce back at Watford on Boxing Day, while the Foxes will look for another unlikely win at home to Manchester City.