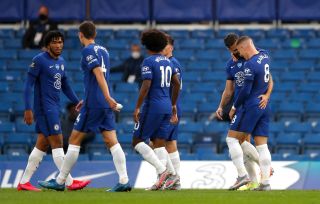 Brazil forward Willian tucked away another nerveless penalty: his third in as many league matches, after his spot-kicks in the 2-1 win over Manchester City and Wednesday’s 3-2 loss at West Ham.

Former Everton midfielder Barkley then capped another industrious performance with a smart strike in stoppage time.

Chelsea’s demoralising midweek defeat by the Hammers, coupled with Manchester United thrashing Bournemouth 5-2 on Saturday afternoon had seen the Blues drop out of the league’s top four for the first time since October.

But Frank Lampard’s men jumped straight back above United to reclaim fourth spot, with a commanding Saturday night victory in west London.

Lampard had demanded atonement for Wednesday’s shock loss at West Ham, and his focused Chelsea charges delivered against an admittedly-limited Watford outfit.

Stamford Bridge has been awash for weeks with talk of a summer signings revolution, but here it was the old guard who came good for Lampard.

Giroud recently signed a one-year contract extension, but he will face extra competition next term in the shape of £53million RB Leipzig recruit and prolific Germany hitman Timo Werner.

The 31-year-old Willian continues to hold out for three years on a new deal, whereas Chelsea only want to offer him two.

But the 70-cap Brazil star now boasts 11 goals in all competitions this term, and three in two matches after his brace amid that galling loss at West Ham.

Lampard has made no secret of his desire to retain Willian’s services next term, and the well-liked winger has doubtless again boosted his chances of a new Blues contract.

Kepa’s awkward pass left the double-marked Andreas Christensen in hot water on the edge of his own box in an inauspicious start.

The Dane rode out of trouble well enough and once the Blues settled they took control.

The United States forward slipped Giroud in on the inside left but the Frenchman could not stretch Ben Foster in the Watford goal.

This time it was Barkley who slid Giroud through, with the 33-year-old making no mistake in leaving Foster with no chance.

Watford’s deep double-bank defending continually invited Chelsea to attack, and once in the lead the Blues moved with more fluency and comfort.

Pulisic caused panic in the Hornets’ box, inciting a clumsy challenge from Etienne Capoue – and a penalty was the only outcome.

So up stepped Willian, stroking into the net after his now-customary stuttering run-up.

Chelsea continued to dominate after the break, and Willian scythed through Watford’s cover before sending a cute ball through for Giroud.

The Blues striker found the target once more but Foster conjured a solid save.

Willian’s dipping 20-yard drive drew another good stop from Foster. Kurt Zouma connected well from the resulting corner but his header was straight at the Watford goalkeeper.

Late on Danny Welbeck squandered Watford’s only real chance of the night, with Kepa Arrizabalaga pulling off a good save from the striker’s low shot.

Chelsea were denied a second penalty at the death, with Christian Kabasele judged not to have felled the marauding Pulisic after a video assistant referee check.

Just when the Blues were expecting to settle for a goalless second-half though, up popped the in-form Barkley with a smart strike to seal the comprehensive Chelsea win.