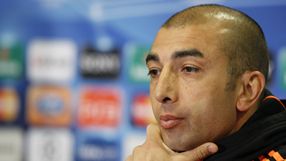 Speaking at a news conference ahead of Wednesday's first leg at Stamford Bridge, Di Matteo, who has revived Chelsea's fortunes after taking over from Andre Villas-Boas, said playing Barca represented the biggest challenge a manager could face.

Chelsea take on Pep Guardiola's European champions after winning nine, drawing two and losing one of their last 12 matches since Di Matteo took charge and he said they were in a buoyant mood after beating Tottenham Hotspur 5-1 in the FA Cup semi-finals on Sunday.

"The spirit in the group is very high, very good and we could not have had a better game than Sunday's to prepare for this game," he said.

"They do not like playing against us. We are two teams who have a lot of respect for each other, but we always give them a lot of problems. Playing Barca gives a manager his biggest tactical challenge."

Chelsea, languishing sixth in the Premier League standings, have not lost to Barcelona the last five times the teams have played.

Since the Spanish side won 2-1 at Stamford Bridge in a round of 16 match in 2006, four matches between them have ended in draws and Chelsea have won once.

The last time they met, though, in the second leg of the Champions League semi-final in 2009 was effectively a defeat for Chelsea when Andres Iniesta's equaliser in the third minute of stoppage time to earn Barcelona a 1-1 draw and seal their place in the final on away goals.

Like Barca, Chelsea have been in the semis six times in the last nine seasons, but unlike their opponents who have gone on to win the Champions League three times in that period, Chelsea have reached only one final and lost it to Manchester United on penalties in Moscow in 2008.

"I wouldn't lie - it is disappointing to have reached so many semi-finals and the final and not win the competition," Chelsea midfielder Frank Lampard said.

"But one of my worst moments was losing the 2009 game. That was worse than any other because of the circumstances, but success comes in football and so does failure and you have to hope that one day we will win the Champions League ourselves."

To do that Chelsea must stop Lionel Messi from adding to the 68 goals he has scored in 59 matches this season, although in six games Messi has yet to score against Chelsea.

He might, however, be able to exploit the hole in the Chelsea defence left by the injured David Luiz.

"That is a big loss for us," said Di Matteo.

Barcelona manager Pep Guardiola told reporters he had huge respect for Chelsea and was impressed by Di Matteo's impact.

"They have the same spirit, the same soul and the same foundation as they had in 2009," Guardiola said. "I admire this generation of players. It is going to be very