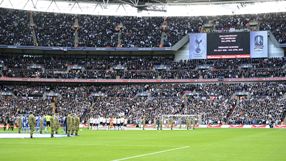 The tribute at Wembley was cut short because of the noise from the Chelsea end and the London club issued a statement condemning those who failed to remain silent.

"Chelsea Football Club is extremely disappointed that a very small minority of fans embarrassed the club by not honouring the moment's silence before kick-off," it read.

"Chelsea FC believes all moments of respect should be honoured and today we pay our full respects to all those that suffered as a result of the Hillsborough disaster 23 years ago.

"The club will be working with Wembley and the FA to identify those responsible and if we are provided with evidence that season-ticket holders or members have been involved we will take the strongest possible action against them."

The previous day Liverpool, who lost 96 fans in the crush before an FA Cup semi-final against Nottingham Forest in 1989, and Merseyside rivals Everton met in the other semi-final, before which both sets of fans observed a minute's silence impeccably.

Both Liverpool manager Kenny Dalglish and Everton's David Moyes praised the fans for their behaviour.

Liverpool had requested that the match against Everton should not be played on Sunday, which was 23 years to the day that the disaster occuured.

A special service was held at Anfield on Sunday when candles were lit for each of the victims.