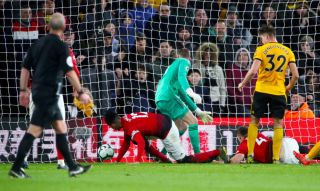 It is just 17 days since the Norwegian caretaker manager bemoaned the “poorest performance” of his reign, with Nuno Espirito Santo’s side deservedly reaching the FA Cup semi-finals at United’s expense.

The visitors started their Molineux return well but wasted a number of chances either side of Scott McTominay’s superb first goal for the club, allowing Diogo Jota to level before Ashley Young became the recipient of Mike Dean’s 100th Premier League red card.

Chris Smalling’s own goal sealed Wolves’ 2-1 comeback win, sending them to Wembley in high spirits as Solskjaer’s men not only blew the chance to exact revenge but also to reassert themselves in the top-four race.

United should have been three up midway through the first half, with Romelu Lukaku – in for the injured Marcus Rashford – and Jesse Lingard wasting glorious opportunities in between a fine McTominay strike.

Fred’s heavy touch from a David De Gea pass was ruthlessly punished as Jota was put behind to level, before being clattered by Young in the 57th minute as referee Dean showed the United captain a second yellow card.

What it all means…#PLpic.twitter.com/Yv3LgREgo5— Premier League (@premierleague) April 2, 2019

From there it was always going to be an uphill battle, with Smalling turning into his own goal as Solskjaer tasted defeat as permanent United boss for the first time.

Wolves, by contrast, head to the capital for Sunday’s FA Cup semi-final clash against Watford in high spirits after seeing out an early storm.

Lingard had an attempt within seconds of kick-off and Lukaku should have done far better than heading straight at Rui Patricio following fine work on the right by Diogo Dalot.

United had as many shots on target in the opening five minutes as they managed over 90 minutes of last month’s FA Cup quarter-final – a bright start that led to a 13th-minute opener.

Fed by Fred around 25 yards from goal, McTominay rolled the ball and unleashed a low, fizzing effort that beat Patricio down to his right.

It was a superb way for the Scotland international to open his United account and Lingard should have added to it within four minutes when found unmarked from a clipped Lukaku pass.

United could have been 3-0 up but Wolves were belatedly jolted into life midway through the first half.

Raul Jimenez’s strike over from an acute angle was swiftly followed by the previously impressive Fred meeting a De Gea pass with a heavy touch.

Leander Dendoncker, Matt Doherty and Ruben Neves had attempts as United wobbled, with Luke Shaw’s 10th booking of the season meaning he will miss the next two league matches.

Lukaku struck just across the face of goal before the break, which United returned from looking to have settled down.

Fred tried his luck before McTominay got on the end of a deflected shot, only to be denied by a strong hand by Patricio.

Young was booked just before that effort and was soon walking off the field in the 57th minute.

United were on the backfoot as Wolves unleashed wave upon wave of attack, with penalty claims after Jota went down under pressure from Dalot ignored.

Solskjaer’s side were managing half chances but their defence was looking unsteady, with that instability leading to a 77th-minute goal.

A cross from the left was not dealt with as Phil Jones challenged Jimenez, with Smalling inadvertently prodding into his own goal under pressure from Dendoncker.

McTominay saw a shot tipped around the post as United pushed for a leveller that was not forthcoming.

In fact, De Gea did well to stop Smalling scoring a second own goal before Victor Lindelof troubled his goalkeeper.

Ivan Cavaleiro rattled the crossbar in stoppage time as a bad night threatened to get even worse for United.