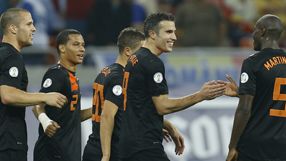 A record crowd of more than 50,000 fans, who helped create a fantastic atmosphere at the National Arena, went delirious when Romanian Gabriel Torje hit the crossbar from a curling free-kick after five minutes.

The Dutch, who inflicted a first defeat on Romania, went ahead after eight minutes when home goalkeeper Ciprian Tatarusanu punched the ball after an inswinging corner, only for Jeremain Lens to send a looping header beyond the defenders from outside the penalty area.

Romania have enjoyed a flying start to their campaign after beating Estonia, Andorra, Turkey without conceding a goal and their coach Victor Piturca decided to field an unchanged starting lineup.

Gheorghe Grozav, who scored the winning goal against Turkey and recovered from a groin injury just before the match, missed a chance to level the score with a fine volley.

However, the Balkan side, who have not qualified for the World Cup finals since 1998, found the fast and aggressive play of the Dutch difficult to cope with.

Unmarked Bruno Martens made it 2-0 from close range after Rafael van der Vaart delivered a precise free-kick but when the visitors slightly reduced the tempo Romania hit back with a superb solo effort by sole striker Ciprian Marica.

The Dutch, who stretched their run to 12 World Cup qualifying wins in a row, restored their two-goal advantage in the dying seconds of the first half when Van der Vaart converted a harshly-awarded penalty.

"It's a fabulous achievement after a poor start in which we were lucky not falling behind as their free-kick hit the bar," Dutch coach Louis van Gaal told Dutch SBS6-TV.

After a lively start to the second half, chances began to dry up with the Dutch side switching to a more defensive style.

The hosts, though, refused to give up and visiting keeper produced his best to parry Bogdan Stancu's thunderous shot as organisers announced that the National Arena's attendance record had been surpassed with 53,329 fans watching the game.

The previous record was set in May when 52,347 fans watched the Europa League final between Spanish clubs Atletico Madrid and Athletic Bilbao.

A strong Romania appeal for a penalty was waved away with less than 10 minutes remaining when Martens brought down substitute Adrian Popa in the area.

Robin van Persie, returning in the central striking role, completed the rout with an easy finish five minutes from time.

"The most satisfying part was the second half when we really killed the match and we didn't allow the Romanians to create chances," added Van Gaal.

Romania coach Victor Piturca refused to criticise his players despite the heavy defeat.

"We're beaten categorically but this match already belongs to history," Pirurca said. "We have nine points and we'll fight with Hungary for the second place."

Netherland, who top the table with 12 points from four matches, host Estonia in their next qualifier.

Hungary, who beat Turkey 3-1, and Romania have nine poin