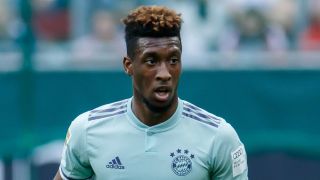 Kingsley Coman has dismissed speculation of a move to Arsenal, insisting he has had no contact from the Premier League club.

The France international made just 10 Bundesliga starts for Bayern Munich in 2017-18 and has failed to make himself a mainstay in the German champions' starting line-up since joining from Juventus in 2015.

However, Coman signed a three-year contract extension in December of last year, committing his future to the German club until 2023.

With Arsenal manager Unai Emery reportedly interested in signing the 22-year-old, Coman was asked whether he was certain to be playing for Bayern in the upcoming season, to which he replied: "Normally, yes."

When asked to clarify his comments, the France international said: "Normally means normally. I am at Bayern now.

"I extended my contract for five years, so normally I will stay here.

Coman struggled with an ankle injury in the second half of the 2017-18 campaign and missed out on France's World Cup squad after undergoing surgery.

The winger made an appearance as a second-half substitute in Bayern's 3-1 win over Paris Saint-Germain in the International Champions Cup on Saturday, and said he was working his way back to form and fitness amid fierce competition for places.

They're on the pitch now too Meritan joins and Kingsley as half-time substitutes. , and have made way. 0-1 July 21, 2018

"I have more personal ambitions. In other words, I hope to find the level again I had before my injury," he said.

"We are all there to help the team and of course, there are some who will play more than others. But above all, I will focus on me, give everything to find my level again.

"Inevitably, we always want to play as much as possible. Not only this year, but also last year, and the year before.

"After that, there is a coach and the coach will make his decisions. We must accept it but necessarily, we always want to play as much as possible."