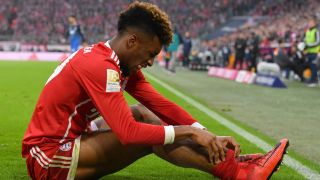 Coman, 21, was hurt within moments of his introduction in the 68th minute at Allianz Arena, where hosts Bayern played out a 0-0 stalemate Saturday.

"He sustained an injury to his ankle. He rolled his ankle, it has to do with his capsule," Heynckes said post-match.

"He has big problems but his ligaments are okay. We'll have to see how it develops over the next few days."

" sustained an injury to his ankle" - Jupp gives a first update on Kingsley  February 24, 2018

Despite the draw, reigning champions Bayern are 20 points clear atop the German summit.