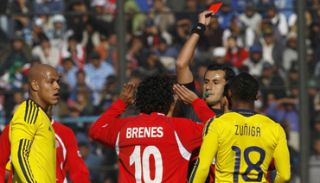 El Salvador's Joel Aguilar who, together with the match delegate controversially allowed a World Cup qualifier to go ahead despite heavy snow in March, was also among the 10 referees named by FIFA on Monday.

Osses, famous in his native Chile for his frequent use of red cards and his involvement in a number of stormy matches, was at the centre of a row following his handling of the Libertadores Cup tie between Uruguay's Nacional and Ecuador's Barcelona in Montevideo.

He handed Nacional defender Alejandro Lembo a second yellow card in the 77th minute but failed to produce the red and the player, who had started to walk off the field, changed his mind and stayed.

Osses finally showed Lembo the red card five minutes later. Barcelona were also furious at having a penalty turned down in stoppage time and Nacional immediately went up the other end to equalise and draw 2-2.

His performance was widely criticised in both countries as well as his homeland and the Ecuadorean federation protested, demanding an "exemplary punishment for the referee".

In 2005, Osses was attacked by Union Espanola goalkeeper Ignacio Gonzalez, who was banned for 22 games.

Three years later, he sent off three players from Universidad Catolica during a fiery Santiago derby against Colo Colo, who won 3-1.

Another controversial performance came in the second leg of the Apertura championship final two years ago, when he awarded two penalties to Unversidad de Chile in their 4-1 win over Universidad Catolica.

He also sent off one player from Universidad de Chile, two from Catolica and was surrounded by the furious losing team at the end.

Aguilar officiated the United States-Costa Rica World Cup qualifier in Denver in March, when the Central Americans launched an official protest at the playing conditions following their 1-0 defeat.

Costa Rica said the pitch markings were not visible, the ball could not be passed properly and stadium employees entered the field while the ball was still in play to clear away snow.

The eight-team Confederations Cup, to be held in Brazil in June, is a test event for the following year's World Cup.

"These officials are all potential candidates for next year's flagship football event in Brazil, and such high-profile tournaments are key to their preparation," said Massimo Busacca, FIFA's head of refereeing in a statement.

"We prepare like a football team, like players do, paying special attention to uniformity and consistency, fair play, protecting players and the tactical approach."

"Everything must come together now, in this very important competition, which has some of the best players and a world-class lineup of teams."