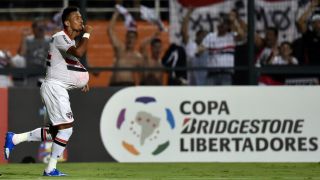 A 1-0 home win against Mexican side Puebla saw Argentina's Racing Club advance to the group stage of the Copa Libertadores on Wednesday.

Gustavo Bou's 75th-minute strike was all that separated the teams Wednesday, after last week's 2-2 draw in the first leg.

Racing will play in Group 3 of the Libertadores, along with Boca Juniors, Bolivar and Deportivo Cali.

Sao Paulo also went through thanks to a 1-0 home victory over Cesar Vallejo.

A 1-1 away draw against the Peruvian club in the first leg meant a win or a scoreless draw was enough for Sao Paulo to get past the qualifying round. And it was the Brazilian outfit that did most of the attacking throughout the contest, with Rogerio's goal two minutes from time sealing the series 2-1 on aggregate.

Sao Paulo will now contest Group 1 of South America's most prestigious club tournament, alongside River Plate, The Strongest and Trujillanos.