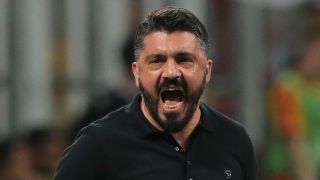 AC Milan's desperation to recapture their former glory makes the Coppa Italia final as important as a World Cup, according to Gennaro Gattuso.

The seven-time European champions have won just one trophy since 2011, the Supercoppa Italiana against Juventus in Doha in 2016.

But they can make it a second against the same opposition at Stadio Olimpico on Wednesday, when they will attempt to deny the Bianconeri from adding to a near-certain Serie A title.

Gattuso, who replaced Vincenzo Montella in November, has regularly questioned the mental strength of his players, but says they fully comprehend the need to restore a winning culture.

"This is like the World Cup for our enthusiasm, the enthusiasm of the fans and their desire to get back to lifting a trophy again," Gattuso told reporters on Tuesday.

"You can sense it. Considering the team we've got, we just need that spark to light up the fireworks.

"I didn't need to fire up the lads as it's the kind of match that fires you up anyway.

"This is the most important match of my coaching career. There have been a few disappointments, but we hope this one can be satisfying."

Rino Gattuso: "Preparing for a final as a player is different. Now that I am a coach I really feel lots of pressure. I only stop thinking about it when we are in training"May 8, 2018

The clash also presents another opportunity for Leonardo Bonucci to get one back on his ex-employers, having lost both league meetings this term.

"He won it all as a player and I am lucky to have him as my coach," Bonucci said. "He and Allegri do have similarities. They know how to manage the locker room and they get the best out of their players.

"I don't think I’ll need to make a speech as the squad is fired up, plus we've got our coach to provide the right motivation."

Milan could be boosted by the return Lucas Biglia with the midfielder set to undergo a fitness test on the back problem that has forced him out of the last two matches.