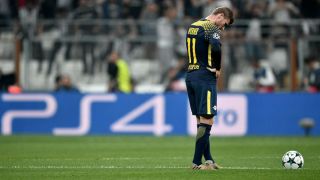 Timo Werner had to be substituted during RB Leipzig's Champions League defeat to Besiktas as the noise in the stadium made him feel dizzy.

Leipzig suffered a 2-0 loss in Turkey on Tuesday, with the deafening atmosphere inside the Vodafone Arena seemingly playing a significant role in the result.

Werner was forced off after 32 minutes in Istanbul, the forward asking to be substituted having attempted to play with earplugs in.

He was quoted by CapaMag Spor as saying: "I have never seen such an atmosphere in my life. I couldn't focus on the match.

"I asked for some ear plugs and it didn't help either. I still don't feel well."

Leipzig went behind inside 11 minutes and never recovered, conceding a second on the stroke of half-time as they slipped to a first defeat in Group G.

Leipzig coach Ralph Hasenhuttl said of the atmosphere: "He [Werner] asked to come off so I took him off.

"It is impossible to prepare your team for an atmosphere like this. There was a deafening noise [and] at the start of the game we were a bit affected.

"We were not good in the first 20 minutes at all. But it was a lesson for all of us. I saw who I can count on in times like these. This is a lesson for us to learn and we keep learning.

"In the second half, my players stepped up and had chances but it wasn't enough. I congratulate Besiktas and they got a deserved win."