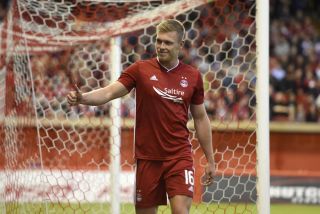 Aberdeen manager Derek McInnes believes Sam Cosgrove deserved to come out of the side for his own benefit.

But the Dons boss admitted his top goalscorer was too good a player to leave out long term.

Curtis Main was drafted in at Hamilton on Tuesday after Aberdeen went five games without a goal following Cosgrove’s late penalty winner over Dumbarton – his 21st goal of the season.

Main responded with the opener in a 3-1 victory while second-top goalscorer Niall McGinn hit his sixth goal of the campaign.

Cosgrove came off the bench with 10 minutes left and McInnes does not feel substitute will be a regular role for the 23-year-old.

“In fairness to Sam, Sam has carried that burden for a while,” McInnes said ahead of Sunday’s visit of Ladbrokes Premiership leaders Celtic.

“When you have a 21-goal striker in the building, any manager would be reluctant to leave him out.

“But there comes a point where you have to be fair to the boy himself.

“Sam will come again, whether he starts on Sunday or comes off the bench, the fact is the last 18 months he has been in such good form that you would never ignore that readily.

“But there comes a point where others deserve an opportunity and for the benefit of Sam, he needs to come out the team to go again.

“Curtis led the line well and was part of a very good team performance. It was great for him to get his goal running the channels, which we want to see more of, rather than just a player who wants to hold the ball in.

“But Sam’s too important for us to be a bit-part player. Sam will come again.”

After scoring his second goal since his summer move from Motherwell, Main stated that he expected to start against Celtic.

“I think his words were a wee bit twisted but if you’re a striker and have scored a goal and been part of a good team performance, it’s likely,” McInnes said.

“Curtis gave us a sign of what he is capable of. Myself and the supporters have been looking for that type of performance.

“Like any manager, if your striker is scoring goals and playing well in a winning team performance, you very rarely leave him out.

“That’s the way it is for strikers, if they score a goal they are capable of going on a run.”

McInnes admits he could pair the two forwards together, although it appears unlikely he would do so against Celtic.

“That’s something we have considered a few times.,” he said. “They have played together a couple of times, and when Curtis or Sam has come off the bench.

“For far too long we have depended on Sam, we are looking for others to chip in.

“The boy deserves a chance to have a break, look from the outside and come in again.”