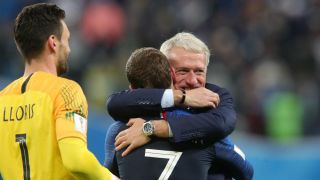 There was a pleasing reassurance to be had in St Petersburg around mid-morning on Tuesday.

A decent chunk of the travelling Les Bleus contingent, some with FIFA Fan IDs round their necks as a distinguishing feature, had made their way to the Hermitage Museum's extensive display of paintings from and influenced by the French Impressionist school.

Before watching the heroes of today on the turf, it was time for the greats of yesteryear on canvas. Monet before Mbappe, Cezanne then Varane, Gauguin preceding Griezmann.

Fittingly, when the teams were announced for France's 1-0 World Cup semi-final win over Belgium at Krestovsky Stadium hours later, the lone Spaniard of the piece – Red Devils' boss Roberto Martinez – had gone all Pablo Picasso. Where would all the pieces lie in a particularly abstract team line-up, with Mousa Dembele another hulking and skilful element?

Antoine Griezmann not the only French artist on display in St Petersburg today.Yeah, that's contrived. Fine with itJuly 10, 2018

It was 4-3-3 at kick-off and Jan Vertonghen's left-back berth immediately looked a short straw as France dynamo Kylian Mbappe bolted past him within seconds.

But then came the shape-shifting that so disorientated Brazil in the first-half of Belgium's quarter-final tour de force in Kazan.

Toby Alderweireld, Vincent Kompany and Vertonghen lined up to face down the France front three, Axel Witsel and Dembele patrolled in front and Nacer Chadli took his positional cues from wherever France's not-really-left-sided-midfielder Blaise Matuidi laid his hat.

Then there was Kevin De Bruyne, popping up everywhere. Not so much artist as geometry professor, seeing the whole picture and absolutely every available angle.

Whatever formation Martinez was playing, whatever picture he was painting, it was not one France could decipher as De Bruyne cutely found Eden Hazard and the majestic Chelsea attacker – arguably thrust into his Real Madrid audition – fizzed one wide.

Hazard, all deft brush strokes, sashayed in from the left and saw Raphael Varane deflect his next effort over, while Marouane Fellaini – clattering about the pitch like a painter and decorator in splattered overalls – was proving a nuisance.

Didier Deschamps is not an artist. He is the water carrier.

The 1998 World Cup winner cheerfully shrugged off a pre-match question over whether he was a lucky coach rather than a good one, but he will be immensely satisfied with the clarity of thought that saw his players turn the game around.

Resisting the understandable urge to unleash Mbappe at every opportunity, N'Golo Kante and Paul Pobga drove efforts to play though the Belgium midfield. Confronted with familiar foes, they knew Witsel, Dembele and Fellaini's capabilities are plentiful but do not extend to turning around and scurrying after short, sharp passes with any relish.

Olivier Giroud, who said before the game he was not bothered by his lack of World Cup goals from centre-forward, unhelpfully laboured the point by failing to put away a pair of chances in quick succession before Thibaut Courtois brilliantly denied right-back Benjamin Pavard – freed from a Hazard detail that had threatened to become messy.

The tide had turned and any Belgian satisfaction from Kompany blocking Giroud's 50th-minute shot behind was short-lived. This is the set-piece World Cup, remember.

Antoine Griezmann found quality previously lacking in his performance to float a delivery to the near post. Samuel Umtiti darted in front of Fellaini – now less painter and decorator and more a pair of step ladders – to power home.

The breakthrough felt so significant because of how France operate under Deschamps. Belgium's vulnerability was clear and almost exploited after the opener as Giroud remained wayward. Argentina part two? No, bolt it down.

Mbappe broke from petrifying defenders to reside deep on the right flank. He did not replace Giroud at centre-forward, as seemed desirable, when Steven N'Zonzi came on to give the midfield surplus ballast.

In such a joyful World Cup, a Deschamps bitten badly by his Euro 2016 final defeat to arch pragmatists Portugal would jar as a winner for some. He won't care.

Nor will he care if he comes across Croatia and their majestic sculptor Luka Modric, shaping and moulding every chequered red and white move, or Jesse Lingard, Dele Alli and Raheem Sterling with their relentless running Jackson Pollock-ing pitch maps as England captain Harry Kane gets ready to snaffle the takings in the gift shop.

It was a good job those France fans enjoyed some artistry earlier in the day. Deschamps only has designs on giving them victory.