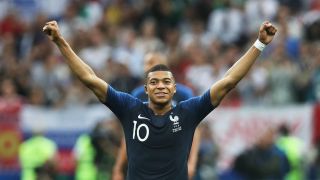 Didier Deschamps insists he was not surprised by the "extraordinary" quality shown by Kylian Mbappe during France's successful World Cup campaign and championed the forward's self-awareness.

France defeated Croatia 4-2 in the World Cup final to lift the trophy for a second time, with Mbappe getting himself on the scoresheet with a fine 30-yard finish.

But that was only one of several brilliant moments the 19-year-old had in Russia, with his two-goal display in the 4-3 last-16 triumph over Argentina arguably one of the best individual performances of the entire tournament.

Mbappe went on to claim the Best Young Player award for his efforts, but Deschamps was more surprised by the Paris Saint-Germain star's intelligence than his impact.

"I was not surprised," Deschamps told L'Equipe. "To be so crucial and effective at just 19, though, that is extraordinary.

"Kylian is also very intelligent. One of the best things he said was, 'I cannot be the spokesman for this team'.

"Despite his immense quality on the pitch, he knew that he did not have the experience to deal with the situation that others do."

Although France went on to win the tournament, their somewhat pragmatic tactics attracted criticism from some, with it being suggested that Deschamps could not get the best from such a talented squad.

But Deschamps was adamant that France cannot be considered a defensive team.

He said: "People are talking about us a defensive team? Oi! We scored 14 goals, including four in the final, as well as 11 in the knockout phase.

"Back in 2010, Spain scored just eight. The truth is that France were better than everybody else."