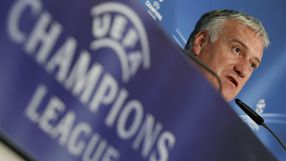 Marseille arrived in Munich, site of their biggest triumph in 1993 when they were crowned European champions with Deschamps as captain, after a six-hour delay due to a strike in France.

"We will have a lot of quality against us but at the end we do not want to regret anything and we will see what comes out of it," Deschamps said. "The chances are minimal."

Marseille go into Tuesday's quarter-final return leg having lost eight of their last nine games in all competitions.

The former European champions, who are ninth in the league, got a break when their weekend Ligue 1 game against Montpellier was put back to help them prepare against Bayern.

"I think we had very busy weeks. We worked well on Saturday and Sunday and that had not been possible before because we had so many games. At least we will not be complaining about a lack of freshness," Deschamps said.

"Bayern are used to a busy schedule. They are this big machine that keeps rolling on in all competitions," he said.

Bayern are in the running for a treble of domestic league, cup and the Champions League.

Deschamps ruled out an openly offensive game by his team as that would be too dangerous against a team like Bayern.

"We have to reach our maximum in all parts of our game," he said. "We cannot throw everything in front from the first minute. We need to defend well just like we did for 43 minutes in the first game.

"I want to tell my players of the privilege of being here. That privilege comes with responsibilities and I demand a good performance," said Deschamps.