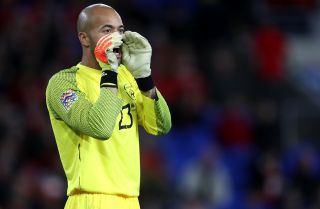 Darren Randolph has warned people not to expect the Republic of Ireland to play like Barcelona as new manager Stephen Kenny tries to instil a different philosophy.

Ireland head into the opening Nations League fixture in Bulgaria on Thursday evening with Kenny taking charge for the first time after replacing Mick McCarthy at the helm.

The former Under-21s boss asked his young guns to play on the front foot and has signalled his intention to do the same with the senior side, although keeper Randolph insists that will not mean throwing caution to the wind.

He said: “Some of your colleagues or the public might think we’re going to start playing like Barcelona or Manchester City. Yes, we want to play, but we won’t be taking stupid risks.

“In international football, there’s stuff to play for. Yes, we want to be a possession-based team and we want to try different things, but it won’t be anything ridiculous. There will be a slight change in what people are used to seeing.

“That was one of the things the manager said yesterday. He’s sick of hearing certain comments, and sometimes the negative approach that we take toward football or to games against certain opposition.

“He said he wants us to have more belief in ourselves. He’s obviously going to try to play to our strengths, and he feels he has the personnel to do so.”

Kenny will use the fixture in Sofia and the Nations League clash with Finland in Dublin three days later to prepare his team for October’s delayed Euro 2020 play-off showdown with Slovakia.

Randolph is a veteran of Ireland’s Euro 2016 finals campaign, where they reached the last 16, and the chance to repeat the feat is one his is relishing – even if football’s shutdown amid the coronavirus pandemic has extinguished any kind of momentum.

He said: “I’ve played at a big championship before, so it’s an experience I want to have again, and also the fact we could have two of the games in Dublin, that in itself is going to be massive.

“To make yourself part of sporting history and Irish history, not many people get that chance. We have that chance, so I’d be lying if I said it wasn’t in the back of people’s minds.”

If Randolph remains first-choice at international level, he has a fight on his hands to enjoy the same stature at West Ham after sealing a January return to his former club from Sky Bet Championship Middlesbrough.

Poland international Lukasz Fabianski currently stands in his way, but the challenge of ousting him is not one Randolph will shirk.

The 33-year-old said: “You have to have confidence in yourself. I wouldn’t have gone if I didn’t think it was possible. Listen, whether it happens or not, that’s another thing, but I have belief and that’s obviously why I went back there.

“He’s a top goalkeeper, an international goalkeeper himself, so again it’s not an easy task, but I wouldn’t say I’m not confident in doing so.”

Meanwhile, Liverpool goalkeeper Caoimhin Kelleher has been called into the squad after Kieran O’Hara suffered an injury that has ruled him out of the double-header with Bulgaria and Finland.