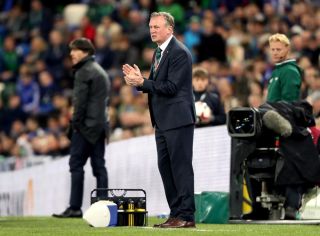 Michael O’Neill’s side have opened their Group C campaign with four straight wins and, following a friendly against Luxembourg, will play host to the Germans on September 9.

By then, Germany will have faced Holland in Hamburg – and the result of that match could prove key in the battle to stay on course for one of the two automatic qualification places.

With a 100 per cent record from three qualifying games so far, and after thrashing Estonia 8-0 in June, Germany will represent a step up in class for Northern Ireland as they aim to reach a second successive European Championship finals.

Two years ago, when they were then the reigning world champions, Germany confirmed qualification for the 2018 World Cup after beating Northern Ireland 3-1 in Belfast.

However, Dowie, who won 59 caps and scored 12 international goals, believes the current Northern Ireland squad can cause plenty of concern for Low’s star-studded side when they head back to Windsor Park.

🙌 The countdown is well and truly on! Here's our squad for #Luxembourg and @DFB_Team_EN 💚 #GAWA— Northern Ireland (@NorthernIreland) August 28, 2019

“It is a huge game and one which everyone is looking forward to – and one we believe we can get a result from. Although Germany had a great result against Estonia, I don’t think they are the side they were,” Dowie told the PA news agency.

“It is very unfortunate for (Manchester City winger) Leroy Sane with his injury, but now he will not be part of that team, which is a big, big blow.

“Of course, though, Germany are still a team of great quality, so they will expect to come to Windsor Park and win – rightly so given their standing, but it might be a lot harder than they think it will.

“It is a game which Joachim Low knows that if they get out of it with any sort of result, he will not be disappointed.”

Dowie added: “Coming to Windsor Park to take us on there, it is a very difficult venue – and if you get out of there with a win, then well done you because you would have played well.

“Whatever happens, Germany will certainly know they have been in a game.”

Dowie will be supporting Jeff Stelling’s March for Men in aid of Prostate Cancer UK during the Belfast leg on September 6, which finishes at Windsor Park.

The 54-year-old former Luton, Southampton and West Ham forward, who went on to manage both Crystal Palace and Charlton in the Premier League, hopes the campaign can help continue to raise awareness in the fight to beat prostate cancer – a disease which kills one man every 45 minutes in the UK.

“There is that stigma that men just don’t like to talk about anything like this, but now people are starting to understand,” Dowie said.

“There are conversations between people, guys are happy to go get checked, and I guess you never know what is round the corner.”

:: Iain Dowie will be supporting presenter Jeff Stelling as he takes on four walking marathons in four days in four nations from September 5-8 for Prostate Cancer UK, visiting 16 football clubs in Glasgow, Belfast, Cardiff and London. Find out more at marchformen.org or search ‘Jeff’s March for Men 2019’ on Just Giving.