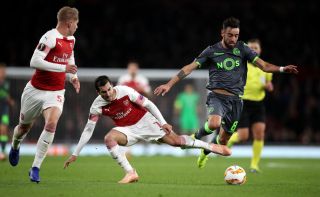 Premier League clubs have tried their best to complete deals early, with several announced on the penultimate day of the January transfer window and now fewer than 24 hours left for teams to tie up last-minute signings.

Manchester United finally secured the services of Bruno Fernandes on Thursday for an initial fee of £46.4million from Sporting Lisbon to end a lengthy saga and boost their bid for Champions League qualification.

Sheffield United continue to surprise and may rival Ole Gunnar Solskjaer’s side for a European place after they completed the club-record transfer of midfielder Sander Berge from Genk, while Danny Rose’s loan to Newcastle from Tottenham was finalised on the penultimate day of the winter window.

It leaves little room for surprises before Friday’s 11pm deadline but Dries Mertens’ future may make things interesting as the seconds tick away, with Napoli listening to offers.

Another attacker, based in England, who may secure a dramatic late move is Hull City’s Jarrod Bowen, with Crystal Palace one of several Premier League clubs chasing his signature.

The Eagles are also hoping to complete the transfer of West Brom full-back Nathan Ferguson, while Burnley raided the Championship on Thursday to sign Josh Brownhill from Bristol City.

Southampton defender Cedric Soares is expected to seal a loan move to Arsenal, but forwards are the real golden ticket in January and Man United and Spurs, who have lost Marcus Rashford and Harry Kane to injuries, will keep tabs on Willian Jose of Real Sociedad.

Oliver Giroud is another striker who may be on the move, but Everton fans can relax regarding Richarlison’s future with Barcelona no longer looking to bring anyone in.

Liverpool snapped up Takumi Minamino early while Spurs swooped for Steven Bergwijn from PSV and Wolves finally captured Daniel Podence, previously of Olympiacos, but there is still time for deal sheet drama.