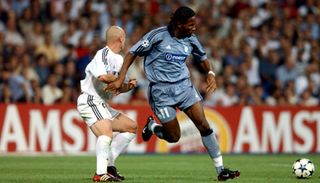 The Ivory Coast international, who turned 35 this month, made his debut in Europe's elite club competition at Real's Bernabeu stadium in September 2003 playing for Ligue 1 side Olympique Marseille.

Although he scored to put Marseille ahead in the 26th minute, goals from Roberto Carlos and Luis Figo and a double from Brazilian Ronaldo fired Real's "Galacticos" to an easy 4-2 group stage victory.

"It will be very special for me, I will never forget that day," Drogba was quoted as saying in Galatasaray's club magazine this week.

"It was very important for my career," added the former Chelsea player.

Drogba was Chelsea's key performer on their run to a first Champions League triumph last season before quitting the London club for a stint in China and then moving to Turkey.

He struck the winning penalty in the final shootout against Bayern Munich having earlier kept Chelsea in the match with a crashing header two minutes from the end of regular time that levelled the score at 1-1.

"I just grabbed this chance to be able to play at the highest level in Europe again without thinking," he said. "That's why I am here. To have the opportunity to win again."

Wednesday's clash, the fourth between the clubs in UEFA competition, also pits Drogba against his former manager at Chelsea Jose Mourinho, who is bidding to lead Real to the 10th European crown that has eluded the club since 2002.

"Fatih Terim is a lot like Mourinho in that he is very close to the players and always talking with them," he said.

"The psychological factor is very important in soccer and Terim is very meticulous in that respect."

While Real have fallen in the semi-finals the past two seasons, it is almost a quarter of a century since Galatasaray last reached the last four.

Alongside Drogba, the other heavyweight in their ranks is Dutchman Wesley Sneijder, who won the Champions League with Mourinho at Inter Milan in 2010.

Their attacking trident is completed by Burak Yilmaz, who is joint top scorer in the competition with Real's Cristiano Ronaldo on eight goals.

"Our only weapon against Real Madrid is that we are not afraid," Terim, a former Turkey, AC Milan and Fiorentina boss, told reporters on Saturday.

"That's the way we have always played," he added. "Our strongest side is that we are not afraid to lose, or to be eliminated."