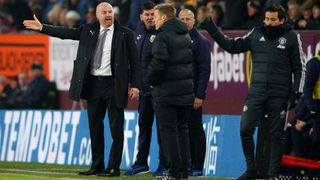 Burnley boss Sean Dyche says it was "annoying" to see a positive performance from his players against Manchester United end in a 1-0 defeat.

The home side acquitted themselves well at Turf Moor but were unable to find a way back after Anthony Martial's fine finish had put United ahead in the 54th minute.

Burnley's fourth straight loss across all competitions comes during a tough run in which they have played United twice, Liverpool and Tottenham in the top flight and Manchester City in the FA Cup in the space of eight matches.

The 2-2 draw at Old Trafford in December is the only time they avoided defeat in those meetings with the members of the so-called 'big six', but Dyche feels their efforts deserve to have been better rewarded.

"I'm frustrated because I want to win and so do my players," he said. "But we are playing a clutch of top sides at the moment and we're so close. That's not just frustrating; it's annoying.

FULL-TIME Burnley 0-1 Man UtdAnthony Martial smashes in the only goal as Jose Mourinho's men cut the gap at the top to 9 points… for nowJanuary 20, 2018

"We've had injuries and suspensions and the thing that can be forgotten is the quality of opposition.

"We've still got Manchester City to come here, after playing Tottenham and Liverpool at home and Man U home and away. Add all that into the pot and they are the margins.

"We are a soft decision away from beating Manchester United at their place, a soft moment form taking a point against Liverpool when you have fought so hard, and then [this game].

"The margins are so tight and they've scored a fine goal through a great finish, but you have to look at the performance levels and I was so, so pleased.

"We are definitely a team that has improved, in my opinion. You can't play like that as regularly as we have, against some of these sides, without seeing how far we've come.

"We are not just hanging on to games. We are taking them on and I have been really pleased with that."