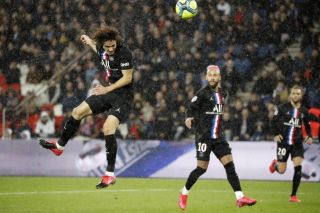 With Chelsea and Manchester United both looking to strengthen their attacking options in the January transfer window, Edinson Cavani found himself in high demand.

The Uruguayan international has just six months remaining on his Paris Saint-Germain contract and was widely tipped for a move to the Premier League but nothing materialised before the deadline passed.

Cavani’s brother, Walter Guglielmone, who also acts as his agent, revealed that despite interest from Frank Lampard and Ole Gunnar Solskjaer, the striker had his heart set on a move to Atletico Madrid instead.

“Cavani was willing to receive less than with PSG,” revealed Guglielmone. “Atletico could not cover the total economic cost of the operation and PSG did not want to lower the amounts he was asking for. Atletico Madrid did not close the agreement.

"Do you think that Edi did not play for almost a month at PSG so that I could drop the operation for a commission and that Edi did not fulfill his dream of going to Atletico Madrid? If it were for money, Edi would have gone to England, Manchester or Chelsea.”

Since moving to France seven years ago, Cavani has scored 198 goals for PSG, contributing to five league title wins and a host of domestic trophies. He has twice been Ligue Un’s top scorer too.

Chelsea were in need of another striker to lessen the goalscoring burden on Tammy Abraham, while Man United were looking to fill the gap left by Marcus Rashford’s back injury.

In the end, Odion Ighalo arrived on loan at Old Trafford in a surprise move from Shanghai Greenland Shenhua. Chelsea had to be content with their current squad after also failing to sign Dries Mertens.

The battle to sign Cavani will continue over the coming months as his PSG deal winds down. According to L'Équipe, the latest rumours of interest come from Inter Miami, David Beckham’s new MLS franchise.

14 of the easiest title wins in English football history