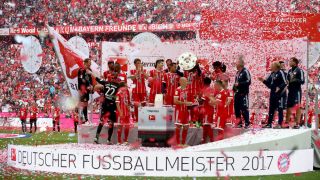 Bayern Munich are set to romp to Bundesliga glory for the sixth straight year, but Stefan Effenberg has come up with a plan to prevent a repeat of such a procession in the future.

The Bavarian giants sit 18 points clear of Bayer Leverkusen, with only 13 matches remaining of a season that is already over as far as the title race is concerned.

Unfortunately for fans of other clubs in Germany, this is a trend that has developed following Borussia Dortmund's back-to-back wins under Jurgen Klopp.

In the five subsequent campaigns, Bayern have won the league by a margin of at least 10 points - with a high of 19 in 2013-14 - but their former midfielder Effenberg, who claimed three successive crowns with the club around the turn of the century, has an idea to ensure the division retains its competitive element beyond the mid-season break.

Good morning, fans!We've got  reasons for you to have a fantastic week ahead! February 5, 2018

Effenberg, in his column for T-Online, proposed an open draw to split the Bundesliga into two groups of nine, with teams playing each other home and away from the start of the season until Christmas.

From there, the top four sides from each group, plus the best fifth-placed team, would start again on zero points in a fresh competition to decide the champions, while the bottom nine clubs would battle separately to retain their top-flight status.

"The championship can not be decided in February or March, even a preliminary decision will hardly exist until then, because all clubs start again in January with zero points," said Effenberg.

Effenberg also believes the initial draw would provide "a huge event that is not only attracting attention in Germany. The ratings would explode."