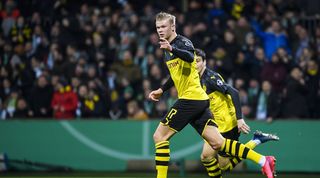 Erling Braut Haaland’s unstoppable form for Borussia Dortmund continued with a goal in a 3-2 defeat by Werder Bremen on Tuesday.

The Norwegian striker has now scored eight goals in four appearances for his new club since joining Dortmund from Red Bull Salzburg at the end of December.

Haaland arrived with a reputation as one of the most promising teenagers in world football after scoring 28 goals in 22 games for Salzburg during the first half of the season.

He was particularly impressive in the Champions League, proving himself with goals in five consecutive matches, starting with a hat-trick against Genk.

As a result, Haaland was heavily linked with a move to one number of Europe’s leading clubs - including Manchester United, having previously played under Ole Gunnar Solskjaer at Molde.

Dortmund won the race for his signature due to their reputation for nurturing young talent and Haaland has enjoyed a perfect start to life in Germany.

He came off the bench to grab a hat-trick against Augsburg on his Bundesliga debut, helping Dortmund come from behind to win 5-3 in the process.

A brace in another cameo at home to Koln led to Haaland being awarded his first start against Union Berlin. He played through the middle, flanked by Jadon Sancho and Marco Reus.

Sancho opened the scoring after 13 minutes with a deflected effort which made him the first teenager to reach 25 Bundesliga goals.

Haaland wasn’t to be outdone, however, and turned in a cross from close range shortly after for his first of the game. His second, squeezed through the goalkeeper’s grasp, rounded off a thumping win.

A third consecutive win since Haaland’s arrival moved Dortmund up to third in the table, three points off leaders Bayern Munich.

And the youngster proved on Tuesday that he can also be effective in cup competition, finding the net even as Dortmund lost 3-2 to Werder Bremen in the last 16 of the DFB-Pokal.