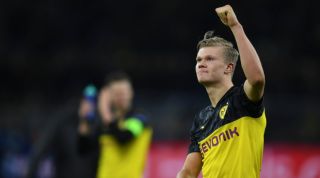 Borussia Dortmund striker, Erling Haaland, says that Cristiano Ronaldo was his idol growing up and is the reason he became a footballer.

Haaland is enjoying a remarkable season in front of goal, already scoring 39 times in 29 matches. That has included 11 in his first seven games for Dortmund since making a January switch from Red Bull Salzburg.

The 19-year-old most recently netted in their Champions League last-16 first leg victory over Paris Saint-Germain and told Record after the 2-1 win of his admiration for Ronaldo.

"I would love to meet him and tell him that I am a footballer thanks to him. For me, he was always a role model," Haaland said about the Juventus forward.

The Norway international has already been seen in training imitating Ronaldo's famous goal celebration and is currently racking up scoring statistics that rival the 35-year-old. For Juve this term, the Portugal international has 24 strikes in 29 appearances.

However, Haaland is still some way off Ronaldo's outstanding career record of 625 club goals; as well as a further 99 for Portugal.

The teenager was just two-years-old when his idol made his debut for Sporting Lisbon back in 2002.