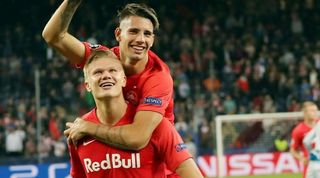 The Norwegian has caught the attention of some of European football’s biggest clubs after a superb start to the 2019/20 campaign in Austria and the Champions League.

According to Bild, the 19-year-old has a release clause written into his contract that means he can leave Salzburg for just €20m.

Haaland has scored 27 goals in 20 appearances this season in all competitions, including eight in the Champions League.

Manchester United are interested in reuniting the teenager with Ole Gunnar Solskjaer, who he previously worked under at Norwegian side Molde.

However, the German outlet claims that Borussia Dortmund are currently leading the race to secure his signature in the mid-season transfer window.

The list of suitors doesn’t end there, as Barcelona, Bayern Munich, Real Madrid, Juventus, Manchester City, Arsenal, Chelsea, Sevilla and Valencia have all been keeping tabs on the striker’s development.

Haaland is set to lead the line for Salzburg against Liverpool in their Champions League meeting next week.

The Austrians could knock the defending European champions out at the group stage with a win, if Napoli overcome Genk in the other group game.

The Norway international has links to England, as he was born in Leeds and is the son of former Leeds United, Manchester City and Nottingham Forest midfielder Alf-Inge Haaland.

ANALYSIS Now Jose Mourinho knows: it will take more than his mere presence to turn this Tottenham side around

QUIZ! Can you name the 48 Premier League managers with at least 50 wins?