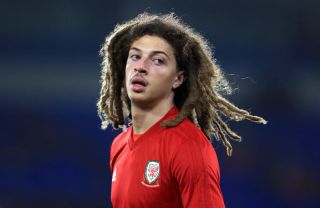 Wales manager Ryan Giggs says Ethan Ampadu is a victim of growing pains after the Chelsea midfielder dealt a blow to his European Championship plans.

Ampadu has been ruled out of Wales’ opening Euro 2020 qualifier at home to Slovakia on Sunday with a back problem after failing to link up with the squad for the friendly against Trinidad & Tobago.

Aaron Ramsey will also miss that Wrexham friendly on Wednesday with what Giggs has termed as “a slight knock to his thigh”, but the Arsenal midfielder is expected to be fit for the Slovakia game.

Ampadu, however, will miss both games and Giggs has drawn parallels with the 18-year-old’s injury problems to those once suffered by former Liverpool and England midfielder Steven Gerrard.

“He reminds me of Steven because he’s still growing,” Giggs said. “Every time we meet up I think he’s grown, or I’ve shrunk – one of the two!

“I think that’s the main issue. Steven Gerrard had it, and a couple of players had it when they’re still growing, they pick up these little knocks and strains.”

Giggs said Ampadu had “felt his back” before Chelsea’s Europa League victory away to Dynamo Kiev last week.

The injury was scanned on his return from Ukraine and the teenager is expected to be out for a couple of weeks.

It is the latest blow in what has been a frustrating campaign for Ampadu, who has started only three games under Maurizio Sarri at Stamford Bridge this season.

“That’s always the case with players in that situation, or he has a great pre-season and forces his way into the first team,” Giggs said when asked if a spell out on loan was a possible avenue to more regular football.

📷 It's been another hard training session for the squad today but there was some time to have a little fun too!— Wales 🏴󠁧󠁢󠁷󠁬󠁳󠁿 (@Cymru) March 19, 2019

“We’ve had players in the same situation – Brooksy (David Brooks), Harry Wilson, Ben Woodburn – talented players who’ve gone out on loan and benefited from it.

“But if he can force himself into that Chelsea squad then that would be great.”

Wales will also be without injured strikers Sam Vokes and Tom Lawrence against Slovakia.

But Brooks, Daniel James and James Lawrence should be fit despite training separately from the main squad at Manchester United’s Carrington complex on Tuesday.

The really good news for Wales is that Gareth Bale, his country’s record goalscorer, is fit after turning his ankle playing for Real Madrid recently.

Bale scored and played the full 90 minutes of Real’s 2-0 LaLiga win against Celta Vigo on Saturday, and Giggs declared himself delighted with that outing for his 29-year-old talisman.

Preparations ahead of Trinidad & Tobago tomorrow. Good to be back with the boys. 🏴󠁧󠁢󠁷󠁬󠁳󠁿 #TogetherStrongerpic.twitter.com/ALsipTTtMN— Gareth Bale (@GarethBale11) March 19, 2019

“Usually when Gareth scores he usually goes on a run, so that’s good news,” he said.

“It was great to see him get 90 minutes under his belt.

“Gareth is the main man. But I want to take the pressure off him somewhat.

“The emergence of Wilson, Brooks and others has given us lots of attacking options.”