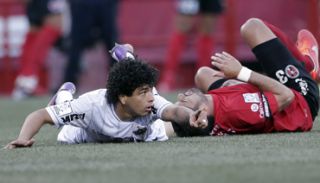 With Ronaldinho having a quiet game in midfield, Tardelli scored one goal and laid on the added-time equaliser for Luan on the synthetic pitch at the Caliente in the Mexican border town.

Boca Juniors and Newell's Old Boys drew 0-0 in the first leg of their all-Argentine tie at La Bombonera in Buenos Aires.

Newcomers Tijuana shocked favourites Atletico by going two up inside an hour with Colombian striker Duvier Riascos giving them a one-goal halftime lead.

Tardelli warned Tijuana of what might come with a shot that goalkeeper Cirilo Saucedo deflected for a corner with his foot and pulled one back in the 66th at a corner with his sixth goal of South America's elite club competition.

Ronaldinho sent in his corner-kick close to the goal-line where a defender's effort to clear the ball at the near post merely lifted it past Saucedo to the far post where Tardelli volleyed in for the first goal conceded by Tijuana at home.

Tijuana looked set for an unexpected victory two minutes into added time before Tardelli steered the ball into the path of Luan who shook off defender Javier Gandolfi and scored.

The second leg is next Thursday in Belo Horizonte.

Boca, gunning for a seventh title, will be without central defender Guillermo Burdisso for the second leg of their tie in Rosario on Wednesday. He was sent off for a second booking after tussling with an opponent at a corner in added time.

The home side had the better of the first half and Juan Roman Riquelme set up a chance for striker Nicolas Blandi with a low cross to the far post but defender Marcos Caceres blocked in the nick of time.

Argentine first division leaders Newell's came into their own more in the second half and Boca goalkeeper Agustin Orion had to make a diving save to push away striker Ignacio Scocco's scissored volley from Maxi Rodriguez's cross in the 69th.