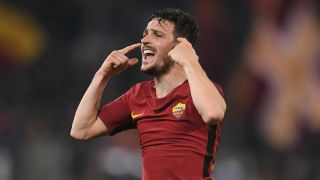 Roma sporting director Monchi insists Alessandro Florenzi has not been issued with an ultimatum as the club attempt to meet the in-demand Italy international's wage demands.

Atletico Madrid, Chelsea and Inter are all reportedly interested in signing Florenzi, whose contract expires at the end of the upcoming season.

The versatile right-back, who has won 28 international caps, is a product of his hometown club's academy but is yet to agree on Roma's offer of an extension.

Monchi admits there is work still to be done between the parties.

"We have not moved forward much. It's a difficult negotiation because he is a great player," Monchi told reporters.

"I think that Roma have made a strong offer to him, a very good offer, but I understand that he too has his thoughts and requests. I am confident, but not much has changed in the last few days.

"There will never be an ultimatum, Alessandro is a son of this club. What will happen will happen, I am fighting every day to get the renewal done and I have faith. But we are still a little apart."

Monchi was speaking at a media conference to present new signings Ante Coric and William Bianda and he used the opportunity to announce the club have also captured Palmeiras goalkeeper Daniel Fuzato.

Monchi: "We've done exactly what we wanted to do in the transfer market but you can never rest on your laurels. We'll remain on the lookout for opportunities until the end of the window. An example of that is the reserve goalkeeper we're adding: Daniel Fuzato from Palmeiras.”July 7, 2018

"We have not received any offers, so it's difficult to have an idea about figures if there has not been any offer," Monchi said of the goalkeeper, whose World Cup ended on Friday.

"Now Alisson will go on holiday and he will join up with the squad after that."