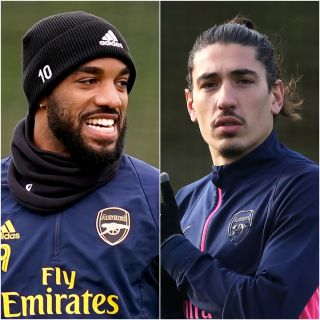 Arsenal could offload as many as nine players over the summer to help with the club’s rebuilding after a sub-par league season was salvaged with FA Cup final victory, the Daily Mail says. The Gunners could part with HectorBellerin and AlexandreLacazette, while Sokratis, MatteoGuendouzi and HenrikhMkhitaryan may also depart to raise funds for incoming talent.

But Pierre-Emerick Aubameyang will be offered a chance to stay at the Emirates, the Daily Mirror says. The club are keen to keep hold of the striker but will have to approach demands of around £250,000 per week, the paper says.

Meanwhile, Mikel Arteta is looking to reinforce his club’s defence with the signing of DiegoCarlos from Sevilla, according to the Daily Telegraph. Carlos, 27, moved to the LaLiga outfit from Nantes in 2019 and has made 41 appearances for the side this season.

Willian is looking for a three-year deal to remain at Stamford Bridge, but the club and player have reached an impasse as Chelsea will not offer a contract longer than 24 months, says the Daily Mirror. Tottenham and Arsenal have been linked with the 31-year-old, while reports suggest a club in Spain or MLS could also take on the forward.

ChrisHughton has emerged as an early favourite to take the reins at Bournemouth after Eddie Howe left the Cherries, reports the Daily Mail. Hughton’s last job in management was at Brighton, while Howe is in no rush to return to work, the paper adds.

Troy Deeney: Tottenham are reported to have been given the opportunity to sign the Watford striker as a backup to regular Harry Kane, reports the Daily Mail.

Divock Origi: Aston Villa are looking to bolster their strike force with the 25-year-old Liverpool player, says The Sun.

Ben Godfrey: The defender is set to leave Norwich after their relegation, with AC Milan and Napoli keen, according to Calciomercato.