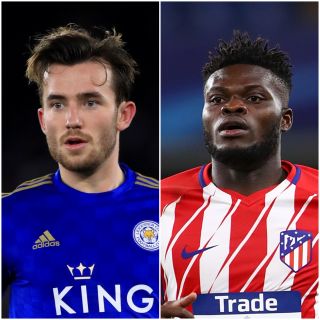 Chelsea want to sign Leicester’s Ben Chilwell, 23, but have run into a money problem. The Daily Mirror reports the Blues have been turned off by Leicester’s £80million valuation of the England left-back, prompting interest from Manchester United and other Champions League clubs.

Thomas Partey’s possible move from Atletico Madrid to Arsenal has been complicated by interest from Serie A, according to the Daily Mail. The Gunners had struggled with justifying paying the 27-year-old’s £50m release clause, with the paper citing Gazzetta dello Sport as reporting Juventus want to sign him, and the midfielder himself is interested in moving to Italy.

Tottenham and Manchester United have swung and missed at Paulo Dybala before but they could be about to get another chance to sign the playmaker. The Mirror cites La Gazzetta as saying the Argentine will be pushed out of Turin if Juventus bosses can receive a hefty fee for him. Spurs or United will have to spend big to get him, with the 26-year-old valued at £90m after an impressive season in which he helped Juve claim the Serie A title.

Allan has fallen out of favour at Napoli and could soon be a Merseyside resident. The Daily Express reports Everton manager Carlo Ancelotti wants to bring the Brazil midfielder to Goodison Park, after the pair previously worked together at AC Milan.

Recent reports out of Brazil suggested Liverpool were interested in signing a talented young player dubbed ‘the next Neymar’, but the Evening Standard says that is not the case. The paper has dismissed claims the Reds want to bring Talles Magno across from Vasco da Gama as the 18-year-old would struggle to secure a work permit for the UK because he has not been capped at senior level for his country yet.

Chris Smalling: The 30-year-old’s Roma stint may continue with Manchester United ready to sell him to the Italian side for £20m.