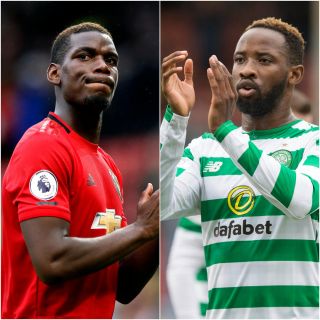 Manchester United have a striker high on their January transfer wish list and have eyed up former Celtic forward MoussaDembele, the Daily Mail says. Dembele, 23, is currently on the books at Lyon and formerly played at Fulham, and Ole Gunnar Solskjaer is looking to fill the gap left by the departures of Alexis Sanchez and Romelu Lukaku.

Sticking with the north west, the saga of PaulPogba looks set to return this winter, with The Sun reporting the 26-year-old will make a fresh push to leave the club in January.

The same paper reports that a Premier League managerial change could be in the offing, with United ready to pay the £32million release clause needed to bring MauricioPochettino from Tottenham.

Meanwhile, the Daily Mirror reports that Massimiliano Allegri could replace Pochettino in the Tottenham hot seat.

Fulham will be looking for £7million in compensation after Liverpool signed 16-year-old midfielder HarveyElliott, The Times says.

Mario Mandzukic has made a decision over a potential #MUFC movehttps://t.co/pnEStVHeHUpic.twitter.com/D405bPEdwl— Daily Star Sport (@DailyStar_Sport) September 26, 2019

Luke Matheson: Newcastle are said to be scouting the 16-year-old Rochdale defender who scored against Manchester United in the Carabao Cup, The Chronicle says.

Taras Stepanenko: Crystal Palace will make a renewed attempt to sign the Shakhtar Donetsk defensive midfielder in January having been thwarted over the summer, reports The Sun.

Danny Simpson: Huddersfield will look to bolster their defence with the signing of the former Leicester player, according to the Yorkshire Post.