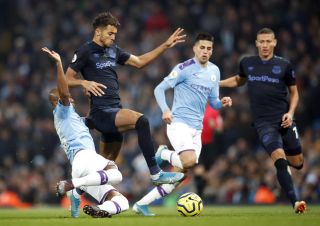 Goals are the key currency both in football and Fantasy Premier League, but how can you predict which players will come up with the goods in future?

Doing so is tricky, but the FPL’s own Threat metric – which measures the quality of a player’s chances in front of goal – can help.

A score of around 100 Threat roughly equates to a goal’s worth of chances according to historical data, and can act as a truer indicator of form than a simple goals tally.

So which players have offered bang for their buck ahead of gameweek 24?

Everton’s Dominic Calvert-Lewin is the Premier League’s in-form striker according to Threat, with an average score of 71.4 in the five gameweeks ahead of GW24.

The Toffee registered almost as much Threat in that time (357) as he did in the rest of the season beforehand (371) including achieving his first 100+ score against Newcastle in GW20.

With four goals in those five league games, DCL’s Threat scores confirm he is scoring in line with his performance – in layman’s terms, that means if he continues to perform as he has been, the goals should continue to flow.

Those exhibitions of his talent have in turn produced excellent points returns for those who have backed the Englishman, with two double-figures gameweek scores in his last nine games.

An injury proved something of a stumbling block for Aguero and Manchester City before the new year, but the forward has returned with intent.

Aguero might have missed one game and appeared as a substitute in another between GW19 and GW23, but in that time he has accrued a mammoth 283 Threat courtesy of two colossal scores.

GW22 saw the 31-year-old notch a hat-trick, 20 FPL points and a Threat score of 109 – the next week he scored a brace and notched his highest Threat score of the season: 151.

Such scores tell us Aguero is truly back to his best, although it won’t be of much use to City in the league as Liverpool march towards their first PL title.

But at 19.7% ownership, perhaps bringing him in for GW25 could help you get ahead in your mini league.

Troy Deeney is another player whose Threat scores suggest he is worth investing in, and with just 1.7% ownership he could prove a lethal differential.

The Watford striker has flourished under Nigel Pearson with the fourth best Threat per app score between GW19 and GW23, scoring at 56 per game compared to 22.1 per game beforehand.

His strength in front of goal has led to five goals in seven games, as well as individual Threat scores of 117 and 94.

That all translates to a lot of FPL points, notching scores of seven, 12 and six in recent weeks, while his price (£6.2m) is appealing too.

These are the in-form Threat kings of the FPL – could one of them do the business for your team?