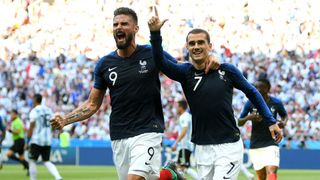 Didier Deschamps has kept faith with the team that beat Belgium 1-0 in the last four, while Zlatko Dalic has been able to keep his favoured Croatia XI intact despite some injury concerns.

Dalic admitted on Friday that one or two of his players were still feeling the effects of the 2-1 semi-final win over England, which was the third match in a row in which Croatia had gone to extra-time.

However, the likes of Ivan Strinic and Ante Rebic have been passed fit, meaning Croatia will be at full strength when they take to the field at Luzhniki Stadium.

France have played comparatively few minutes in the knockout phase and have a fully fit squad to choose from. Deschamps appears to be sticking with a 4-2-3-1 system, meaning Antoine Griezmann will start behind striker Olivier Giroud.