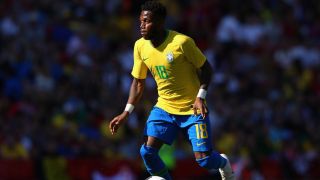 Jose Mourinho says Fred is not a direct replacement for Michael Carrick, but adds the Brazilian could be a key player in Manchester United’s midfield this season.

The Brazilian playmaker joined the Red Devils from Shakhtar Donetsk last month for a fee reported to be in excess of £50million, but is yet to feature for United in pre-season after World Cup duty with the Selecao.

The 25-year-old will be a welcome addition to United’s midfield this season following the departure of Michael Carrick, but Mourinho believes he will bring some creativity and flair to the centre of the park – and something different to the long-serving midfielder.

"We think having a player like Fred in the squad – who is more technical, more quality of passing in short spaces – he can maybe connect [with] the attacking players.

Manchester United continues their pre-season on Wednesday when they host AC Milan in Pasadena, following draws with Club America and San Jose Earthquakes so far.